The swim between the Farallon Islands (west of the San Francisco Peninsula and south of Point Reyes) has long been regarded by long-distance swimmers as among the most challenging in the world1, and is one of the MSF Toughest Thirteen. 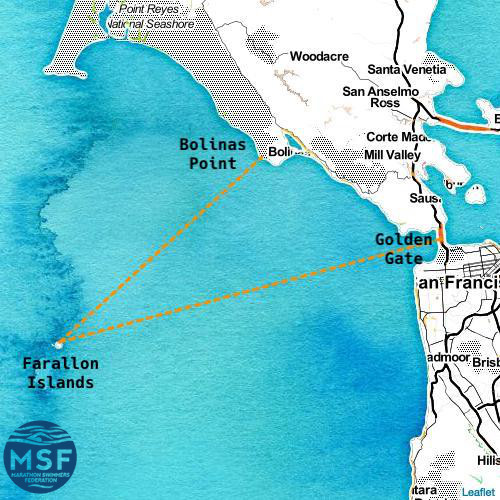 After a number of unsuccessful attempts by various swimmers over 15 years (1952 to 1966), two succeeded in 1967: Lt. Col. Stewart Evans finished near Bolinas Point on the Marin County mainland (33 km) on August 27; and Ted Erikson finished at the Golden Gate Bridge (48 km) on Septemer 17.

After a 40-year dry spell, interest in the Farallon swim picked up again in the early 2010s, with several successful relays and planned solo attempts. In 2014 (as in 1967), two swimmers conquered the Gulf along two distinct routes. Craig Lenning replicated Evans' Marin route, finishing at Muir Beach on April 8 (41.4 km), and Joe Locke replicated Erikson's GGB route on July 12.

MSF recognizes the "Evans route" (to/from Marin mainland) and the "Erikson route" (to/from GGB) as qualitatively distinct routes across Gulf of the Farallones, with equal status. The Marin route is shorter but without assistance from the tide through the Golden Gate. The GGB route is longer but with significant potential benefit from the tide. For both routes, the buoy in Fisherman Bay, Southeast Farallon Island (SEFI) is the recognized start (or finish) point. If additional, qualitatively distinct routes are pioneered in the future, MSF may expand the list of recognized routes.2