Lake Ontario is the easternmost of the North American Great Lakes, with shores in Ontario, Canada, and New York, USA. Lake Ontario has a long and storied history of marathon swimming, primarily in the waters off Toronto. The Canadian National Exhibition sponsored professional races in Toronto from 1927-1938 and 1947-1963. In 1954, 16-year old Marilyn Bell completed the first cross-lake swim, from Fort Niagara (Youngstown, New York) to Toronto's western waterfront near Budapest Park (51 km / 32 miles). A crowd estimated at 250,000 greeted her at the finish. 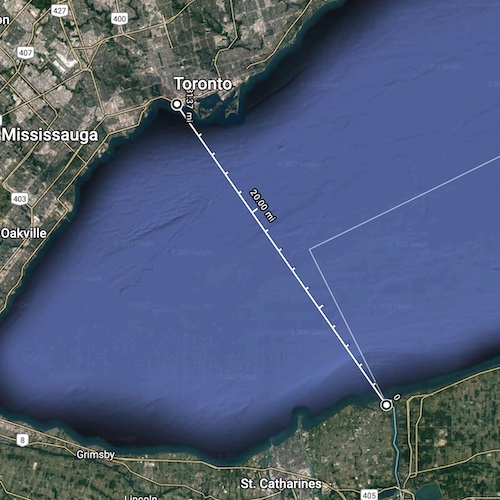 Over the decades since Marilyn Bell's pioneering effort, swimmers have used various start and finish locations for cross-lake swims - resulting in a confusing assortment of routes and distances. In general, the standard historical route across Lake Ontario is from either side of the Niagara River mouth (Youngstown, New York or Niagara-on-the-Lake, Ontario) to the western waterfront of Toronto (49-51 km, depending on specific locations).

In recent years, Solo Swims of Ontario has defined a more specific standard route of Queen's Royal Park in Niagara-on-the-Lake to the ladder inside the breakwater at Marilyn Bell Park in Toronto (50.5 km).

On August 16, 1978, the CNE sponsored a professional cross-lake race, starting in Niagara-on-the-Lake and finishing at Ontario Place - which at the time was the most common finish location of cross-lake swims (including Cindy Nicholas/1974, Debbie Roach/1975, Angela Kondrak/1976, and Kim Lumsdon/1976. Ontario Place is a group of artificial islands extending ~400m off Toronto's western waterfront, and ~500m east of the modern finish location at Marilyn Bell Park. This route is 49-50 km, depending on the precise start location in Niagara-on-the-Lake, which is unknown for the 1978 race.

The winner of the race, John Kinsella, still holds the record for the fastest swim along the standard historical route (Niagara River mouth to Toronto western waterfront).

A few cross-lake swimmers finished their swims on Leslie Street Spit, an artificial headland extending 5 km into Lake Ontario from Toronto harbour, which did not exist at the time of the earliest Lake Ontario crossings. These swims are approximately 5 km shorter than the standard route (44-45 km).

North-to-south swims across Lake Ontario must take a somewhat different line, to avoid the outflow of the Niagara River near the finish. So, swimmers land further east along the Niagara Peninsula - for example, Port Dalhousie. Swims starting from Toronto's natural shore and finishing no further west than Jordan Harbour, are 48-50 km.